If we look at the diagram below we see the “Overtone Series” The perfect octave and the perfect 5th. If you can think in terms of perfect 5ths then the LCC will be much easier to understand. 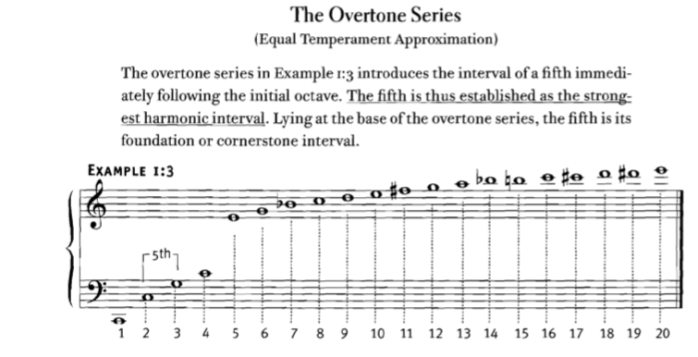 Below we see George Russel’s TONAL GRAVITY of Stacked 5ths. Notice the flattened 5th in the first bar but the “Perfect 5th” in the second bar. [The second bar creating C Lydian].

Below is the piano layout which one can easily hear tonal gravity across the long span of the piano keyboard. We have the #11 [F#] to create stacked “PERFECT” 5THS” [which again results in C Lydian]

If we take the C major 7th chord and look at the C major scale we can see the “Avoid” note. The E note clashes with the F note and the B natural and the F natural produce a Dominant sound. By adding the Perfect fifth  F# there isn’t any “Avoid” notes as displayed in the second bar below.

“The Lydian Chromatic Scale” The ANSWER TO ANYONE CONFUSED!

But “why” does he skip the interval between the Seventh and Eighth notes in the diagram in his book with the outgoing tonal gravity?

2] The answer is because the outgoing tonal gravity level goes to C# next [not F# for perfect 5ths]. Hence the 1st “Lydian scale” then goes to the 2nd scale “Lydian Augmented” with the raised 5th. 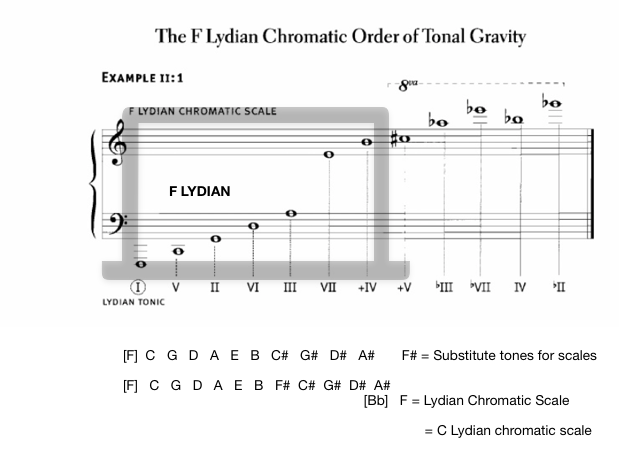 ANSWER BELOW IN DIAGRAM FORM 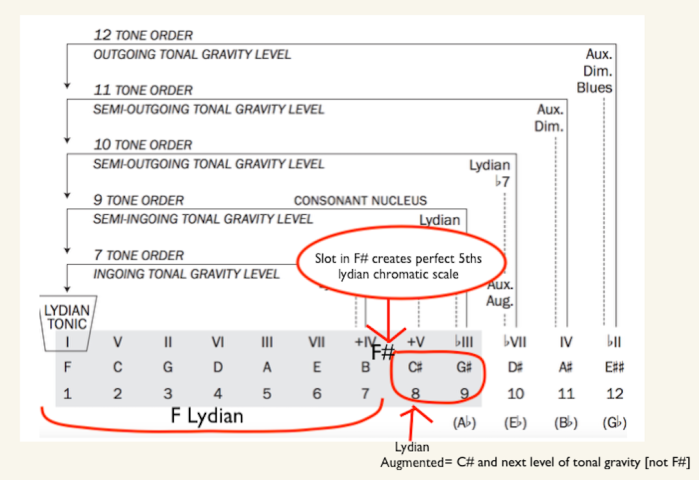 BELOW: AS SHOWN IN GEROGE RUSSELLS LCC BOOK 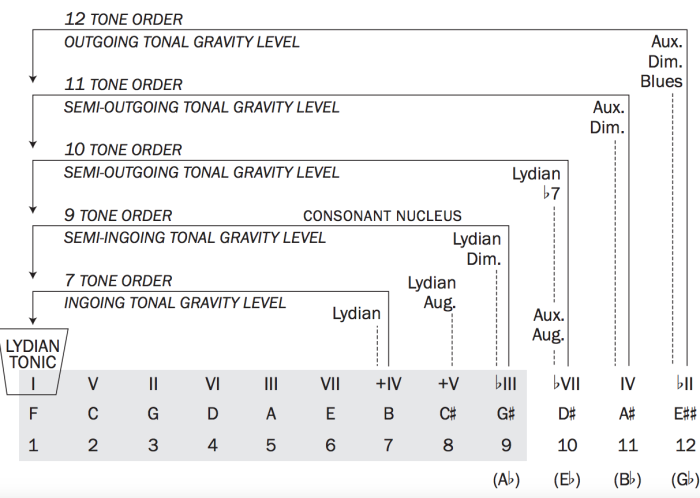 In the example diagram above we see George Russels “Tonal order” going from numbers 1 to 12.  Numbers 1 to 7 being the Lydian mode.

When we go beyond the 7 notes of the lydian scale and further up the cycle of 5ths things increase in terms of  dissonance.

George Russell terms the scales as”Ingoing” “Semi ingoing” “Semi outgoing”  and “Outgoing” . The more we move to the right of the diagram the more “Outgoing/Dissonant” the scale will sound.

In terms of scale substitution we see a C# and not a D flat as this would be a raised 5th [Augmented 5th] and it would make no sense reading it enharmonically as a D flat as we see in the diagram above and in Georges scales.

This could also be seen as 3rd mode of Melodic Minor

This could also be seen as the Whole Tone Scale

This could also be seen as Octatonic Whole Half Diminished

This could also be seen as Octatonic Half Whole Diminished

Finally, Horizontal Scales. Notice the B FLAT hence the Major.

From E Flat 7 going to A Flat major 7th we would employ the D Flat Lydian mode due to the G natural or #11 of the D FLAT LYDIAN to modulate to A flat major 7th.

The Lydian Chromatic Scale and best explanation from “Wikipedia”

Russell builds a prototype chromatic scale starting on the Lydian Tonic by stacking fifths, skipping the interval between the seventh and eighth tones. Using C as the Lydian Tonic yields the following 12-note scale with enharmonic respellings:

LYDIAN PENTATONIC ASCENDING SCALE THROUGH THE CYCLE OF 5THS.

THANK YOU FOR YOUR KIND GENEROSITY. YOUR DONATIONS HELP PAY FOR THIS SITE.

MAKING A DONATION ONLINE WITH PAYPAL. You may use your Credit Card or Debit Card and do not need a PayPal account. 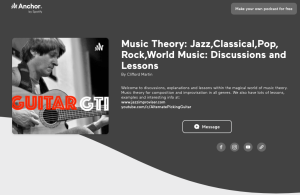 Or enter a custom amount

Your contribution is appreciated.

Your contribution is appreciated.